We had a gorgeous day the other day to get together and take pictures. None of our girls were in heat or pregnant or just had pups they couldn’t leave alone etc. etc. (There’s quite a lot of thinking involved when putting girls and boys together).

We enlisted the aid of my sister and brother-in-law to take the pictures. (Unbeknownst to us, my sister’s camera was not operating properly and turned a lot of things purple.) Trying to get 13 dogs to cooperate was next to impossible. Our dogs are used to sitting down and facing us, so getting them to sit and face the cameras was seriously problematic. (3 of the dogs are under 8 months of age.)

We had a lot of fun and so did the dogs, but when we came inside and put the photos up on the computer, we realized that most of the best shots were either purple or otherwise funny looking. We had been at it for over 2 hrs and everyone was hot and tired (including the humans). We sent our helpers on their way and decided the only way we were going to get the dogs all still and facing us was to put them on the fence and use the timer on the camera. We really couldn’t get the camera up out of the grass enough where we were (hence the odd angle and blades of grass in the homepage photo). I tried moving the camera to the picnic table some ways away and I found out that I could not run that far in 10 seconds. So we stuck with the one at the odd angle with grass blades.

I’m including the purple and the fuzzy but it was fun! 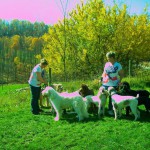 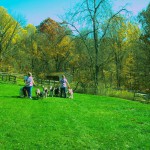 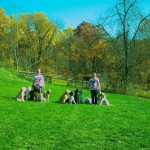 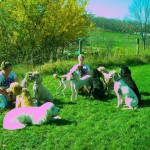 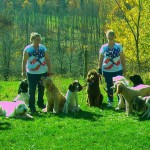 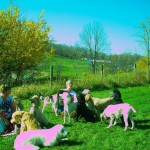 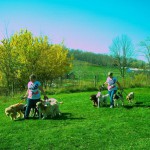 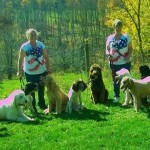 It’s really a shame my sister’s camera was so screwed up because I really could have used several of the photos if it hadn’t been. But anyway, we enjoyed the last of the beautiful weather of October and enjoyed having all the dogs together for the day.

We hope you enjoy the pictures as much as we enjoyed making them!